How CAD Has Revamped Product Development?

CAD and CAM are industrial computer applications, which have greatly reduced the time and cost cycles between initial concepts and product development. They have enabled designers and manufacturers to make significant cost savings. These tools also reduce the time to market for new products, and reduce the number of design flaws, which tend to hamper productivity, and in some cases ground an entire production cycle. Since the 1980s, CAD and CAM have provided exponential gains to both the quantity and quality of products.

The primary advantages of CAD include the ability to:

CAM is the use of CAD data to control automated machinery for producing parts designed using CAD. The benefits of linking part fabrication directly to the CAD model include:

How Boeing Set the Standard for Design Automation?

Boeing is the world’s second largest defense contractor and a leading manufacturer of aircrafts, rockets, and satellites. CAD has played a major role in their product development planning and operations over the past three decades. Boeing announced the development of the 777 in the late 1980s, leading many aviation experts to question their decision. The design of an entirely new aircraft is a highly expensive task, whereas the success of the 747 model had been serving customers for over 30 years led experts to believe that the proper solution was to modify the 747 to suit passenger needs. Boeing applied a new approach that included customer inputs in the design phase from several major airlines, including United Airlines, Nippon Airways, British Airways, Japan Airlines and Cathay Pacific.

More importantly, Boeing invested over $1 billion in design automation using CAD based on CATIA (Computer Aided Three-dimensional Interactive Application) and ELFINI (Finite Element Analysis System) to design the new airliner that would turn out to become an industry standard. Both of these software packages were developed by Dassault Systemes of France. Boeing applied the following objectives to guide their break-through process:

As a result, the 777 was the first aircraft in the world to be designed entirely using CAD technology. It was designed to maximize efficiency and quality. The completed design included over 3 million parts! The design process, its innovative features, and Boeing’s approach to manufacturing became the “Gold Standard” for development of future aircrafts, and were applied to a number of other projects, such as the International Space Station. The design was executed so successfully that a full-scale mock-up of the 777 was never built and was not necessary, reducing the design and production time. In fact, its first flight was so successful that the design was considered one of the most seamless and smoothest to date. 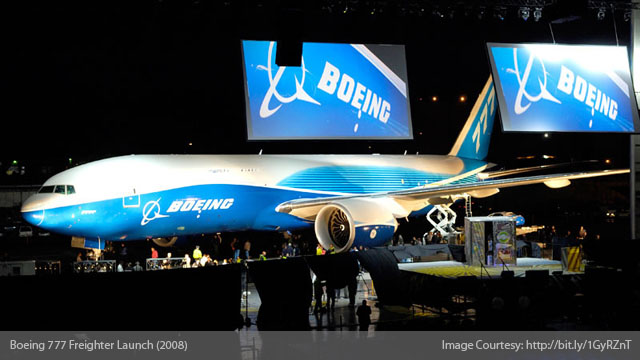 By using CAD models, design engineers were able to provide “built-in” options, which did not need to go to production, such as folding wing-tips. By developing options in CAD, the cost associated with such a trade study and its design is minimized.

What Benefits did Boeing Realize by Automating its Design Process?

To assess the value of the design automation that Boeing implemented in their process by using 3D CAD modeling to design the 777, Boeing compared the effort with their previous design efforts (757 and 767). Overall, they realized:

It is notable that the design was completed at a time when CAD was not linked directly with FEA and CFD modeling software, but the effort has still been widely accepted as one of the greatest uses of CAD of its time.

The value of CAD modeling is just as valuable on a smaller scale, such as in the bicycle industry. For example, Cannondale is another pioneer that has utilized CAD and CAM technology since the 1990s to reduce its production cycle and reduce manufacturing costs, resulting in significantly higher production rates. As part of their integrated system design approach, Cannondale extended its production capability to produce custom designs for customers that are fit to their individual needs, resulting in over 7000 custom fit designs that can be produced using their vertical integration production strategy. Their highly advanced model allows the company to maintain a competitive advantage in all aspects of design, performance, and production.

What Lessons can be Learnt from these Pioneers?