The use of 3D modeling over the past 20 years has greatly improved the ability of engineers to design, model, and fabricate complex parts for a variety of industries, including automotive, aerospace, and biomedical, just to name a few. Imagine a tool that would help civil engineers, city planners, and construction crews plan out networks for their water distribution and waste water management operations with the click of a mouse. Such tools do exist and are readily available today to assist difficult optimizations. The network engineering design of pressurized pipelines is a highly complex one, requiring significant planning and understanding of regulations and the design criteria. As a result, it is a highly time-consuming task, requiring significant effort and prior knowledge. Even with prior understanding, it is cumbersome to meet all of the necessary design criteria (such as pipeline minimum slope, spacing between valves, intersection with existing utilities, and pipe cover) and other applicable quality standards.

Let us consider that you need to design your own water network with a bottom-up approach using the available water source, information on the constituent, age, and tank-mixing in your design. In such a scenario, the common questions could be:

CAD programs, with the use of 3D modeling to design complex water distribution systems, can provide the answer to the above questions. For example, Bentley System’s WaterGEMS, which runs as a stand-alone tool or in conjunction with MicroStation, AutoCAD, or ArcGIS, is one of these tools. Innovyze’s InfoWater and PipePlan tools provide a similar solution. These tools are being readily adopted by utility companies, townships, municipalities, and design engineers to provide efficient design and optimization tools for water infrastructure and networks.

A few of the benefits of using CAD for developing water distribution networks are:

Real Time Examples of CAD Use in Water Distribution Networks

Such CAD tools are already widely used and are most likely to be the future of civil engineering planning and design. Salt Lake City in Utah and Huntington Beach in California are some of the two cities that have already adopted WaterGEMS software for designing, optimizing, and maintaining their water distribution networks. Salt Lake City’s water distribution network serves almost half a million residents and includes over 1,000 miles of pipes. It has a complete geographical information system (GIS) for its water, sewer, and storm water infrastructure, which has been built into its model. Using WaterGEMS, the city is currently building a hydraulic model for its water distribution system using existing data that can be updated and maintained as the city expands.

The tool has been used to determine the optimal pipes for replacing pipes where customers have complained that the flow was insufficient during peak periods. Using this guidance, the city was able to remediate the complaints. Further, the city was able to meet the fire department’s flow requirement of 1500 gallons per minute for all fire hydrants with high pressure. 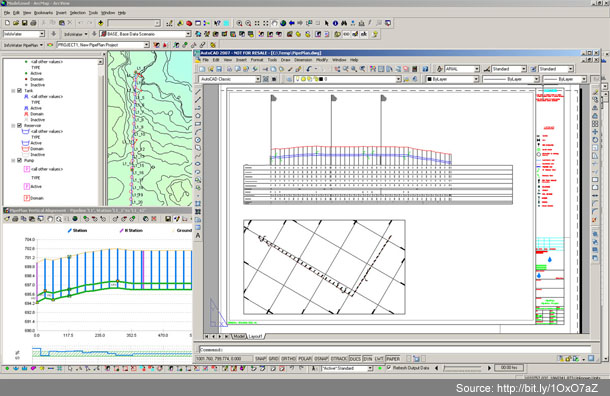 Maintaining water distribution networks is going to be a challenging task for governments across the globe. In this context, CAD will play a significant role in enabling the proper regulation of water flow as cities and urban areas continue to expand. Therefore, tools such as WaterGems and PipePlan will have an even more critical role to play in providing efficient design and optimization of water networks in the future.

How CAD Has Revamped Prod...