Although better proprietary translators are available, the names of STEP and IGES continue to be the most dominant neutral CAD formats.

IGES has been around for many decades. Although it is still carried by many CAD systems, its usefulness is limited, and support for the format has been inactive since 1996. Because of its old age, many features in IGES could be considered as archaic and irrelevant today.

Competing neutral CAD formats (actually kernels or engines) such as Parasolid, DXF and ACIS do exist, still they are not standardized, and they will not be addressed in this article. CAD file exchange and translation between different formats is very necessary, because there are many different proprietary CAD formats. Many leading CAD systems do not rely on STEP or IGES, but they provide their own proprietary formats and translators. This article asks the question: “Which neutral CAD formats are still useful?”

How Did These Two Neutral CAD Formats Emerge?

IGES was the first neutral CAD format. It was initiated by the US Air Force’s Integrated Computer Aided Manufacturing (ICAM) project between 1976 and 1984. In 1980, the US National Bureau of Standards accepted IGES for representing CAD models in the form of circuit diagrams, wireframe, freeform surface and solid models. IGES is good for representing 2D CAD drawings and 3D surface models, but not for 3D solid models.

STEP was introduced in 1984 with the purpose of establishing a CAD file exchange standard, which will cover all aspects of a product throughout its lifetime. Therefore, STEP addresses the representation of geometric shapes, topology, features, tolerances, material specifications, manufacturing, testing and inspection, and product support. STEP does a much better job with representing 3D solid models. It is also capable of representing both geometric and non-geometric data. Support for STEP is ongoing, and it strives to become a standard, which will cover the whole product life cycle in terms of data sharing, storage and exchange.

To What Extent are These Two Neutral CAD Formats Used Today? 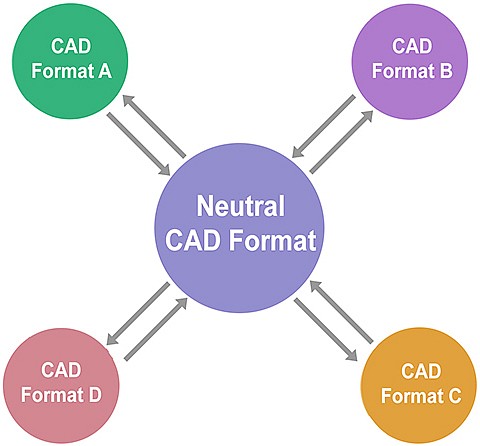 Could There Be A More Useful Neutral CAD Format?

Because CAD formats evolve as CAD application software is developed or created, many software developers have created their own proprietary CAD formats, which are compatible with intended design features. If a CAD system needs to export its design data into a neutral CAD format such as STEP or IGES, it may not be possible to export all novel design features which are not supported by these two file systems. Furthermore, the import/export data transmission efficiency will decrease as newer design features are incorporated into the proprietary application software. As an example, the many sophisticated design features available in Solidworks cannot be fully exported into IGES or STEP.

Without the formation of a CAD consortium that is committed to an up-to-date neutral CAD file format, it is unlikely that a Neutral CAD format can be enduringly effective.

Theoretically, there could be a neutral CAD format which will capture all design and product details into a universal CAD system. However, because CAD technology continues to improve at a rapid pace, it is questionable whether a neutral CAD format could keep up with continuing changes and improvements. It will be as if a cat was chasing its tail.

Without the formation of a consortium among the major CAD vendors, coupled with commitments toward maintaining an up-to-date neutral CAD file format, it is not likely that a neutral CAD format can maintain reasonable effectiveness and longevity.

How Could A More Useful Neutral CAD Format Emerge?

Due to its old age, the IGES format may need to be retired.

The ability to create and maintain a neutral CAD format is a highly desirable but formidable task, because CAD technology is continually evolving and improving. The two available neutral CAD formats (STEP and IGES) do a reasonable job in translating CAD data between proprietary CAD systems, although with less than 100% efficiency. Because of its old age, the IGES format is perhaps inadequate for modern use, and may need to be retired.