Is the Gap Closing between CAD Design and Manufacturing?

Computer Aided Design (CAD) focuses on using computer software to create engineering and architectural designs which include mechanical, electrical, building, and many other types of designs. Computer Aided Manufacturing (CAM) focuses on using computers and robotic systems to assist and guide the manufacturing process. The term CAD CAM has been coined to describe the synergistic workings of CAD and CAM systems to create an integrated system. 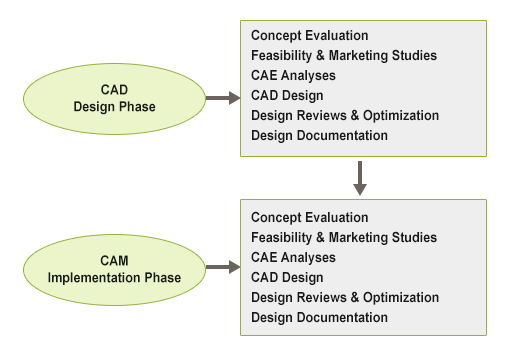 This article addresses improvements that are being made (or which need to be made) in the CAD CAM industry in order to close the gap between CAD design and CAM manufacturing. Currently, a well-known integration between CAD and CAM is called Industry Foundation Classes (IFC). IFC is an industry-wide standard file format for exchanging data between different CAD systems. BIM (Building Information Modeling) serves as a good example for implementing IFC as a multi-disciplinary and collaborative process.

Efforts directed towards improving integration between CAD and CAM could be clarified by answering these questions:

Which Steps in the Current CAD CAM Cycle Could Be Improved?

Computerized steps in the CAD CAM cycle which integrate CAD and CAM are referred to as CIM (Computer Integrated Manufacturing). The good news is that CIM is already being implemented by leading CAD companies, and improvements in CIM are ongoing.

The basic functions of CIM are:

What Improvements Are Being Made At This Time?

Although there is no known CIM which has been adopted on an industry-wide basis, there are examples of well-coordinated and integrated CAD CAM production systems that deserve mention:

What Improvements Lie On The Horizon?

Because of certain significant technological achievements within the past decade, it is reasonable to expect these improvements in CAD CAM integration:

It is probable that future releases of CAD software will conform to IFC standards in similar fashion to what BIM does. This would make CAD designers pay more attention to how a specific design interacts with other related designs, and how a specific design fits into the integrated manufacturing and production plan.

As more companies publish the benefits that they gained by conforming to an integrated CAD CAM system, their competitors will follow suit, and the chances of CIM attaining an industry-wide standard will improve.

The main enablers for improving CAD CAM integration in the near future will be cloud computing, robotics and 3D printing.